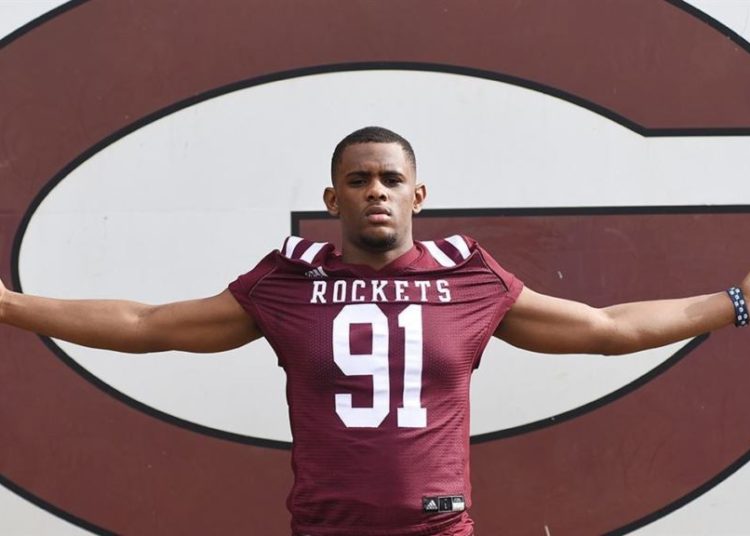 Watch on the NFHS Network

Florida shored up its defensive line of the future on Saturday by picking up the commitment of a lineman ranked by some recruiting outlets as a top-5 DL in the class of 2023.

Kelby Collins, a four-star player out of Gardendale (Ala.) High School, announced he will be a Gator next season. Rivals lists him as the fourth-best DL and No. 40 player overall in the class, while ESPN has him as the fifth-best defensive lineman and No. 63 player overall. 247Sports is lower on Collins, giving him a ranking of No. 173 in the class of 2023.

The 6-foot-5, 280-pound lineman recorded 75 tackles, 20 tackles for loss and 12 sacks as a junior in only eight games played, per MaxPreps.

He chose Florida over Alabama and Georgia, the other schools in his top-three, according to Saturday Down South. 247Sports reported that he had 29 total offers.

This is Florida football’s second commit of the week. On Wednesday, four-star linebacker Jaden Robinson committed to the Gators. Robinson, who had 24 offers, is ranked by the 247Sports Composite as the No. 32 linebacker in the class of 2023.

Florida’s recruiting class is ranked the 12th-best in the nation. Though there has yet to be a five-star player committed to the program, the Gators have made up for it in depth, with 16 four-star players promised to the team. That is more than any other program in the SEC.

Image: Getty ImagesThe Memphis Grizzlies have only had one Defensive Player of the Year winner — Marc Gasol (2013) —...

Watch on the NFHS Network

For wrestling fans looking to watch certain high school playoff matchups—both live or on-demand—in February, the NFHS Network has you...