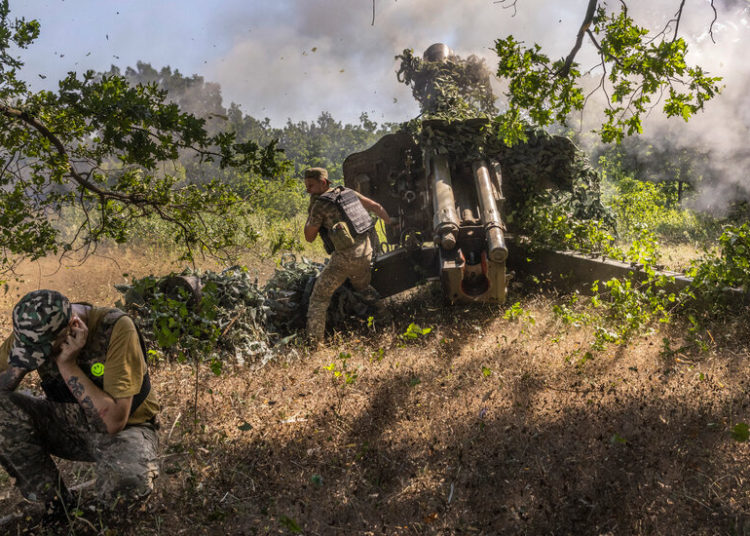 As the war drags on, Ukraine has managed to hold off Russian gains for the past month thanks in large part to continued support from the U.S. and European allies, and help on the ground from partisans.

Ukraine has been able to stem Russian advances recently and force Russia to sustain heavy losses, with up to 500 Russian troops killed or injured every day, according to some estimates.

John Spencer, a retired Army officer and chair of urban warfare studies for the Madison Policy Forum research institute, said that while Ukraine has lost tactical ground in some regions, its troops have succeeded in weakening Russia’s military.

“They have also made Russians expend resources that they can’t replenish,” Mr. Spencer said. “You don’t want to say they’re winning the war because there’s so much fighting to be done, but from really every measure you think about, especially geopolitically and militarily, they’re achieving outweighed gains.”

Ukraine was bolstered again on Thursday when the defense ministers of 26 countries, including Britain and Denmark, pledged about $1.55 billion in military aid to Ukraine. Ben Wallace, Britain’s defense minister, said the aid would include additional multiple-launch rocket systems and long-range missiles.

“We are not getting tired,” Mr. Wallace said of his country’s continued support for Ukraine.

Morten Bodskov, Denmark’s defense minister, said his country would not just help with weapons, but that it would also assist in training service members. Mr. Bodskov said that Denmark’s position on supporting Ukraine is “unwavering.”

Before the aid was announced, President Volodymyr Zelensky of Ukraine addressed the 26 countries and said that the weapons sent to Ukraine should be of “such air power and such a range that Russia would be forced to finally think about a peaceful solution.”

The aid, which Mr. Zelensky has called for repeatedly since the war began, added to another package from the United States that was announced earlier this week. The Pentagon said on Monday that it would send more ammunition in a new shipment of up to $1 billion worth of weapons and supplies. With that, the United States will have sent more than $9 billion in aid to Ukraine since Russia invaded the country on Feb. 24.

Mr. Spencer said that maintaining such continued support from Western countries has taken “as much fighting as actually fighting Russian forces, as far as showing the world that they’re fighting a just war.”

“They’ve achieved history by rallying one of the greatest gatherings of democracies,” Mr. Spencer said.

Support for the country has not only come in the form of aid packages, but also through help on the ground in the form of partisans, resistance fighters who aid the Ukrainian military on Russian-occupied territory.

At least five fighter bombers and three multi-role jets were “almost certainly destroyed or seriously damaged” this week in blasts at an air base in Crimea, according to a British military intelligence report on Friday. The explosions were all the more galling for Russia, because Crimea — which Moscow annexed in 2014 — has largely escaped fighting since February and the base was far from any recognizable front line.

One senior Ukrainian official said the attacks were carried out with the help of partisans, but the government has not taken responsibility for the attack. Mr. Zelensky, in an address after the blasts, criticized officials for releasing any details about the attacks, adding that now was “definitely not the time for vanity and loud statements.”

“The less concrete details you give about our defense plans, the better it will be for the implementation of those defense plans,” he said.

Top Things to Do Near Niagara Falls New York

Top Things to Do Near Niagara Falls New York