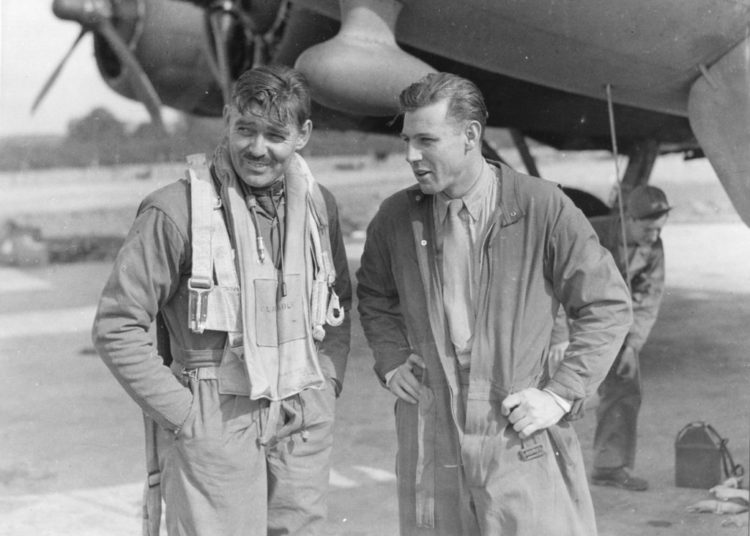 The Movies, Stars, and Stories of World War II

When America marched off to war following the surprise attack on Pearl Harbor, so did Hollywood. Actors, directors, screenwriters and movie moguls did their part by producing morale-boosting movies and documentaries, entertaining troops, selling war bonds and even serving in combat roles. “Hollywood Victory: The Movies, Stars, and Stories of World War II” by journalist Christian Blauvelt chronicles the industry-wide effort to support the nation’s fight against Germany, Italy and Japan.

Thoroughly researched with material from nearly 80 books and other sources, as well as richly visualized with hundreds of archival photos, “Hollywood Victory” describes how stars like Jimmy Stewart, Robert Montgomery and Henry Fonda set down their scripts and volunteered to defend the nation. Stewart, an Army Air Forces pilot and squadron commander, flew B-24 Liberators on 20 bombing missions over Europe, while Montgomery drove ambulances for the American Field Service in France and later joined the navy, serving on a destroyer supporting troops at Omaha Beach on D-Day. Fonda, who enlisted in the navy as well, survived a kamikaze attack off Okinawa aboard the USS Curtis.

Prominent directors also joined the fray: John Ford was wounded by shrapnel while filming actual battle for his 1942 Oscar-winning documentary short, “The Battle of Midway.” Though his contemporary Frank Capra remained stateside for most of the war, he won an Academy Award in 1942 for the first installment of “Why We Fight,” a documentary series that detailed how the United States was drawn into World War II and why it was important to continue in its bloody struggle.

Blauvelt devotes significant space to industry giants, but his book also includes a wealth of fascinating trivia of how more obscure Hollywood figures joined the cause. Philip Ahn, the actors on of Korean independence activist Ahn Changho, willingly played so many Japanese bad guys onscreen in films like “Back to Bataan” (1945) and “Across the Pacific” (1942) that he received death threats. Meanwhile Conrad Veidt, who portrayed Major Heinrich Strasser in 1943’s “Casablanca,” fled Germany in 1933 with his Jewish wife and was so staunchly anti-Nazi that he had it written into his contracts that he would play Nazi parts only if they were “foul, snarling villains,” according to Blauvelt.

Some stars gave more than their careers to the war effort: Carole Lombard, often considered the first female American casualty of World War II, was killed when her plane crashed in Nevada in January 1942 after the actress had just sold $2 million worth of war bonds at a rally in Indiana. (Her husband Clark Gable was so overcome with grief that he enlisted in the Army Air Forces at age 41 and volunteered to fly missions on B-17 Flying Fortresses as a .50-caliber machine gunner.) English actor Leslie Howard, who starred as Ashley Wilkes in 1939’s “Gone with the Wind,” went on to direct anti-Nazi films in Britain; he died in 1943 when German fighters shot down his commercial flight just off the Spanish coast.

Thoroughly enjoyable for history and film buffs alike, “Hollywood Victory” includes many more behind-the-scenes stories and photos of those in Tinseltown who went to war or otherwise supported those in combat. Whether taking up arms or using their talent and influence as weapons, their service helped the United States through one of its darkest moments.

— David Kindy is a journalist, freelance history writer and book reviewer who lives in Plymouth, Massachusetts

This article first appeared in World War II in April 2022.

The Final Week — The Nature Conservancy in Washington

How New Federal Legislation Might Cut Your Drug Costs

How People Remembered Billy the Kid

With smoking six-guns Billy the Kid blazed a path across American folklore as wide as the Chisholm Trail. Fact and...

Top Military Movies To Watch For in 2023

This year is shaping up to be an exciting one in terms of movies slated for release that will appeal...

How W.Britain Has Been Making Model Soldiers—For 130 Years

As time marches onward, some people might be tempted to think that military history lives increasingly in the world of...

Do You Have What it Takes to Follow in These Telemark Commandos’ Ski Tracks?

How New Federal Legislation Might Cut Your Drug Costs