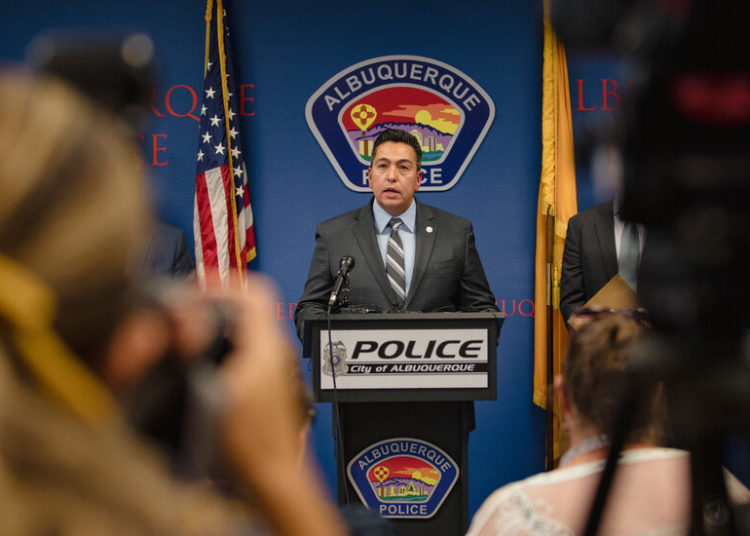 
ALBUQUERQUE — The Afghan man accused of killing two Muslim men in Albuquerque had twice been arrested on domestic violence charges and had been interviewed by the police after several more altercations, including a fight with a man his daughter had dated, according to police records released on Wednesday.

Prosecutors eventually dismissed both of the prior criminal cases against the man, Muhammad Syed, 51, who is now the leading suspect in the shooting deaths of four Muslim men, three of them over the past several days, that have shaken the tight-knit Muslim community in Albuquerque.

Mr. Syed, who is also Muslim, was arrested on Monday by police officers who stopped his car about 100 miles from the Texas state line. In a criminal complaint, a police officer wrote that Mr. Syed had said he was driving to Houston to find a new place for his family to live because things were “bad” in Albuquerque, and he referred to the recent shootings.

The police said they found a handgun in the car and a spent bullet casing between the windshield and the dashboard. Tests on the handgun, the spent casing and casings that were found at the scene of a killing on Aug. 1 were all a presumptive match, the police wrote in the complaint.

The arrest of Mr. Syed was quickly followed on Wednesday by the arrest of one of his sons, Shaheen Syed, whom federal prosecutors charged with lying about where he lived when he purchased two rifles last year.

Police records obtained by The New York Times indicate that Mr. Syed had a series of arguments with family members in recent years that had sometimes turned physical.

In one instance, in 2017, he refused to let his daughter leave the house to attend a college class without being accompanied by one of her brothers, according to an officer’s report, which said the daughter appeared to have swelling around her eye but had asked the police not to arrest her father.

Mr. Syed was arrested less than a year later when his wife told the police that he had grabbed her by the hair while she was driving and had later thrown her to the ground in the waiting room of a human services office. Then, in December 2018, the police arrived at Mr. Syed’s home to find his son with a cut on the back of his head. The son said his father had struck both him and his mother with a spoon during an argument.

In both instances, said a spokeswoman for the district attorney’s office, the cases were dismissed because the victims did not want to press charges.

At least two other domestic fights involved a man who was seeing Mr. Syed’s daughter, Lubna Syed, now 25, according to police records.

The Killings of Muslim Men in Albuquerque

In December 2017, several months after the fight with his daughter, Mr. Syed went to the emergency room with a cut on his chest. He told the police he had been slashed by a man whom his daughter had been seeing while her parents thought she was at work. He said he and his wife had followed his daughter out of the house and confronted the man, leading to the fight.

Two months later, the same man reported to the police that Mr. Syed had threatened to kill him during an argument over his relationship with Mr. Syed’s daughter, but the man declined to press charges, according to a police report from that incident. Deed records indicate that the man and Lubna Syed purchased a home together in Albuquerque in November 2021.

Mr. Syed’s home is tucked away in a patch of one-story houses near Albuquerque’s airport. Three women wearing head scarves answered the door at his house, revealing a living room wall covered with an Afghan flag. One of the women, who appeared to be in her 20s, said the family was not ready to speak about the charges.

A local television station, KRQE, quoted Mr. Syed’s daughter as saying that she did not think her father was involved in the killings and that she thought he would eventually be released.

In the complaint released on Wednesday, the police cited ballistic evidence as part of what led them to arrest Mr. Syed on suspicion of carrying out the Aug. 1 killing of Muhammad Afzaal Hussain, a 27-year-old urban planner, and the July 26 killing of Aftab Hussein, 41, who worked at a cafe. The police also have said they consider Mr. Syed to be the “most likely” suspect in the November 2021 killing of Mohammad Ahmadi, 62, and that of 25-year-old Naeem Hussain last Friday.

Mr. Syed appeared before a judge through a video feed on Wednesday afternoon, with his hands cuffed and chained to his ankles. He was wearing orange sandals and a red jumpsuit with the words “High Risk” on the back.

Through a Pashto interpreter, Mr. Syed asked for permission “to talk for myself.” But his lawyer asked the court not to take any statement from her client, and the judge encouraged Mr. Syed to take his lawyer’s advice and not speak.

“Whatever you guys think is the right thing, sounds good,” Mr. Syed replied.

Judge Renée Torres said she was transferring the case to a district court, where a determination would be made about whether to set bail.

Mr. Syed arrived in the United States about six years ago and had known the most recent victim, Naeem Hussain, since 2016, according to the law enforcement complaint, which did not describe the men’s relationship further.

Mr. Hussain, who had family roots in Afghanistan and Pakistan, had worked as a caseworker for Lutheran Family Services, which has helped resettle many Afghan families in Albuquerque, before starting his own trucking company.

Mr. Hussain was shot in the parking lot of the resettlement agency, hours after he attended a funeral for the two victims that Mr. Syed has been charged with killing. Farid Sharifi, the program director at the agency, declined to say whether the group had helped resettle Mr. Syed’s family.

New Mexico is home to about 1,500 Afghans, a community that has grown substantially since the U.S. withdrawal from Afghanistan last year. About 500 of them are evacuees brought to the United States after the fall of Kabul to the Taliban in August 2021.

Mr. Syed told the police he had fought against the Taliban in Afghanistan with that country’s special forces, according to the complaint.

Mr. Sharifi, the resettlement agency’s program director, said that the community “has been really shaken” by the recent killings and that his agency had been inundated with calls from worried evacuees.

“The refugees have been through horrendous events and have been here trying to put their lives back together,” said Mr. Sharifi, 40, who immigrated to the United States from Afghanistan as a child.

After detaining Mr. Syed, the police searched his home early on Tuesday morning and found two guns, one in Mr. Syed’s room and one in the room of Shaheen Syed, the son who was later charged with lying to purchase the rifles. The son said he purchased a pistol with his father in July, when his father also purchased a rifle, according to the complaint. The police said the elder Mr. Syed bought a scope for his rifle on Aug. 1.

The police said that both of the victims whom Muhammad Syed has been accused of killing were shot more than once. A detective wrote in the complaint that the gunman who killed Aftab Hussein appeared to have waited in the bushes near where Mr. Hussein parked his car and then shot Mr. Hussein when he stepped outside. Several bullet casings were found at the scene.

Six days later, the police said, Muhammad Afzaal Hussain was on a video call with a friend at about 8:35 p.m. when he told the friend that he had to go to take another call. Mr. Hussain was shot about 40 minutes later and was found on a sidewalk about a block away from a nearby park. The police said they found seven 9-millimeter bullet casings at the scene that were later identified as a likely match to the handgun in Mr. Syed’s car, and seven casings of another type that matched the ones found at the scene of Mr. Hussein’s killing.

Muhammad Afzaal Hussain’s older brother, Muhammad Imtiaz Hussain, said in an interview that he had decided against sending his brother’s body to family members in Pakistan to be buried because his brother had been shot so many times that he was unrecognizable. He said the killer appeared to have “wanted to finish him — the whole nine yards.”

Leida, Kevin and their young daughter, Victoria, fled Venezuela, crossing seven countries to reach Texas. That’s when they were pulled...

A factory making iconic French bistro glasses is idling its furnaces to offset soaring energy costs. Cities around France are...

Even as hopes were raised that a permanent presence of United Nations inspectors would help reduce the risk of disaster...