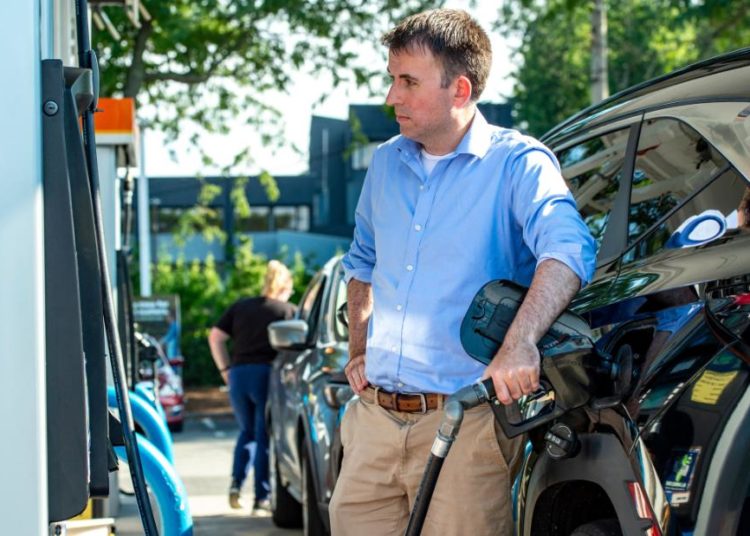 The national average price for regular gasoline fell to $3.99 a gallon on Thursday, according to AAA.

Gas prices hit a record high of $5.02 in June as drivers filled their tanks for the summer travel season. They were also pushed higher by soaring global oil prices as the West turned its back on Russian crude in the wake of Moscow’s invasion of Ukraine.

But prices at the pump have since tumbled 21% as drivers have pared back spending and fears of a recession threatened to crimp demand. Despite the drop, they remain 25% higher than this time last year.

“The market was panicked at the start of the summer. Inventories were extremely tight,” said Patrick De Haan, head of petroleum analysis at GasBuddy. “But the market got overcooked. It was overbought.”

De Haan said the national average could keep falling for the next five to 10 days before stalling out in the $3.70s or $3.80s. However, he noted that oil prices have started to bounce off their recent lows and hurricane season could disrupt energy supplies.

Brian Deese, director of the White House’s National Economic Council, said the drop below $4 is an important development for Americans, translating to $100 less in fuel costs for a typical family with two cars.

“That’s meaningful savings people are going to feel in their lives,” Deese told CNN in a phone interview.

Deese said the White House has been tracking gasoline prices and energy supplies “very closely” and added that prices should continue slipping.

“Pricing in the market today suggests we should see prices at the pump fall a bit more,” he said.

“Despite steadily falling gas prices during the peak of the summer driving season, fewer drivers fueled up last week,” the AAA said in a Monday press release.

“It’s another sign that, for now, Americans are changing their driving habits to cope with higher pump prices.”

Analysts say the unprecedented release of emergency oil by the United States has also helped to drive down oil and gasoline prices. In late March, the White House announced the release of 1 million barrels a day from the Strategic Petroleum Reserve for six months.

US crude oil prices have fallen sharply from a peak above $120 a barrel in June to around $92 a barrel on Thursday, helped by an easing of the global supply crunch.

In a report released Thursday, the International Energy Agency revised up its outlook for global oil supply, partly because Russia has continued to pump more oil than expected.

“While Russia’s exports of crude and oil products to Europe, the US, Japan and Korea have fallen by nearly 2.2 [million barrels per day] since the start of the war, the rerouting of flows to India, China, Türkiye and others, along with seasonally higher Russian domestic demand has mitigated upstream losses,” the Paris-based agency said.

The release of 180 million barrels of oil from the US Strategic Petroleum Reserve has also helped bump up supply.

Ryan Reynolds spent nearly $3 million before consulting his wife: ‘We’re still working through that one’

FDA Requests Melphalan Flufenamide be Withdrawn From US Market

The FDA has now requested that the manufacturer of melphalan flufenamide withdraw the multiple myeloma drug from the United States...

The Best of NextBillion in Your Inbox Each Week! Subscribe to NB Notes for news, jobs & on-the-ground insights from...