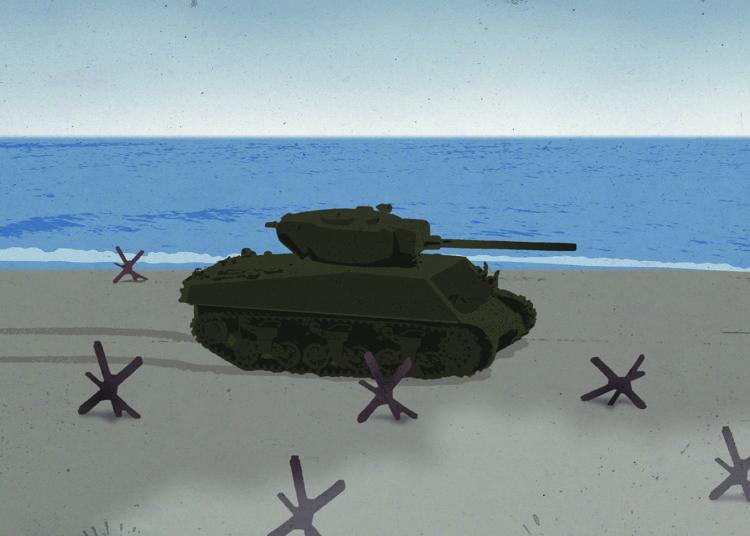 I’m writing this fresh from Normandy, where I attended a street-naming ceremony for the Sherwood Rangers, a British armored regiment that had gone to war on horseback — posted to Palestine in early 1940 — been mechanized two years later, and, by May 1945, had accrued more battle honors than any other single unit in the British Army. They landed on Gold Beach on D-Day, supporting the infantry of the 231st “Malta” Brigade, part of the first wave. I’ve done a lot of research on the Sherwood Rangers, who, with their Sherman tanks, were a fabulous bunch of misfits, eccentrics, charmers and larger-than-life characters.

Many people might think there’s little left to write about D-Day, but that is far from the case. Debates still rage, for example, about who exactly landed where and when on Gold Beach, to the east of Omaha, in the British sector. One can read half a dozen accounts and each one will tell you a different story. My challenge has been to try to unravel what really happened once and for all on the western half of Gold Beach — codenamed “Jig” sector.

GET HISTORY’S GREATEST TALES—RIGHT IN YOUR INBOX

Subscribe to our Historynet Now! newsletter for the best of the past, delivered every Wednesday.

The challenge is that eyewitness testimonies are unreliable sources of detailed information about timing — not least because assault troops had better things to worry about than checking their wristwatches. Unit war diaries are also questionable because they were usually written several days after the event and by headquarters officers who had not landed in the first wave. Then there is the difference between where and when the troops were supposed to land, and where they ended up — thanks to the tides, currents and howling westerly winds that hit the landing craft broadside. Imagine those shallow draft vessels, their flat sides acting like sails, being bucked and rolled while under heavy fire. It’s a wonder they landed at all.

Eyes in the Sky

I’ve nonetheless been reading personal testimonies and poring over unit war diaries and the logs and reports of the Royal Navy, which delivered the troops to the beaches. Naval records tend to be more reliable since ships’ logs have to be maintained all the time. I have, however, been using an additional — and watertight — source: aerial photographs taken by American airmen of the Ninth Air Force in their F-5s, photo-reconnaissance versions of the P-38 Lightning.

The four sorties flown over Gold Beach on D-Day — the first between 10:30 a.m. and 11 a.m., the last between 1 p.m. and 2 p.m. — and the resulting photographs have proved revelatory: We see the Sherwood Rangers’ tanks snaking through inland villages far earlier than they were supposed to have been there; others knocked out on the beaches; columns of vehicles coming off the beaches much farther east than planned; and roads empty during the first sortie but full of traffic a half-hour later.

Cross-referencing these aerial photos with Google Maps — surprisingly easy to do — meant I could measure distances and work out locations precisely to a matter of tens of yards. The infantry had arrived 800 yards east of where they should have been. The Sherwood Rangers’ C Squadron landed on their eastern flank, while its B Squadron arrived as planned, by German bunker WN37 at Le Hamel; the idea was that in tandem with the infantry, they would swiftly knock out that strongpoint. Unfortunately for B Squadron, however, since the infantry was far to the east, the Shermans landed on their own. The F-5 photos show a lone Sherman bereft on the beach, knocked-out by the antitank gun facing down the shore from Le Hamel. Some time ago, I interviewed the crew’s only survivor, Bert Jenkins.

Because they weren’t there.

Matching the D-Day photos to today’s satellite map showed that the tank stood about 250 yards from the embrasure of the German antitank gun. On D-Day’s 78th anniversary, I measured the distance, walked to the spot and paused, thinking of Bert; his commander, Lt. Monty Horley; and the other crew — four men who gave their lives on D-Day. It was a profoundly moving moment, but an enlightening one too.

Hot on the tails of the Navy revealing its space-themed uniform for the annual academy rivalry football matchup, the U.S. Military Academy...

For decades since General George S. Patton’s untimely death in December 1945 there have arisen all manner of conspiracy theories...