And Then There Were Three: One of the Last Living Navajo Code Talkers Dies at Age 98 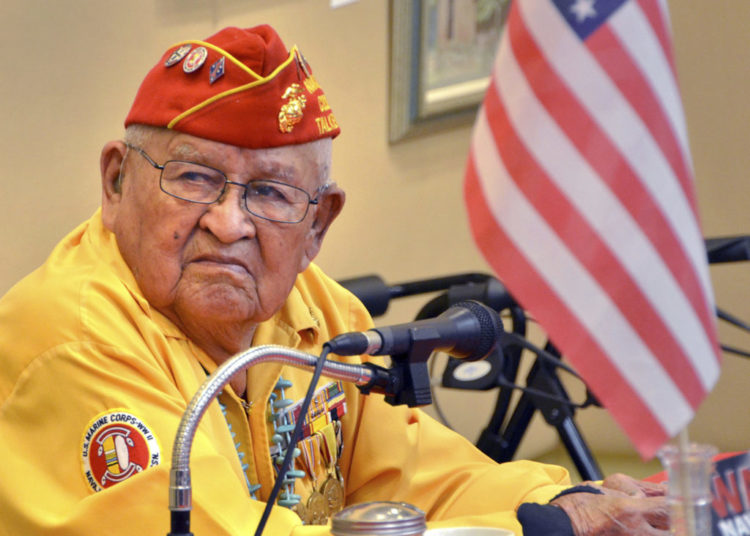 The Day Miss America Almost Got Shot Down Over Vietnam

How This Digital Map is Connecting Civil War Faces to Places

Growing up in rural New Mexico, Samuel Sandoval was discouraged by Christian educators from speaking his native Navajo, or Diné. But when he joined the Marines during World War II, it became his secret weapon: Sandoval, along with hundreds of other men from Navajo Nation, used the traditional spoken language to transmit coded military messages in the Pacific Theater, befuddling Japanese cryptologists and ultimately helping to win the war.

Sandoval, one of the last surviving Navajo Code Talkers, died on Friday, July 29, at the age of 98, according to the Associated Press. Three living members from the group remain: Peter MacDonald, John Kinsel Sr. and Thomas H. Begay.

Born in 1922, Sandoval recalled he “didn’t know what I was getting into” — or how his heritage would shape his role— while enlisting on March 26, 1943. Only after completing boot camp in San Diego and being sent to Camp Pendleton at Oceanside, California, did he meet other Navajo recruits and learn they were to develop their own top-secret code, complete with military terms and expressions that didn’t yet exist. “It was quite a task,” he recalled in a recorded speech at Oregon’s Milwaukie High School in late 2005.

Each letter of the English alphabet was initially assigned a Navajo code word, Sandoval told the Arizona Republic in 2019. “We said the Japanese could easily decipher those 26, let’s add on to it,” he said. “So we did.” In addition to assigning one to three code words to each letter, the group — fluent in both English and Navajo — came up with analogous terms for patrol planes (“ga-gih,” a.k.a “crow”) and other combat expressions. They ultimately coined and memorized hundreds of code words to use in the field.

Shipped off to the South Pacific island of New Caledonia in September 1943, Sandoval joined the Marines on Guadalcanal following initial operations, Bougainville, Guam, Peleliu and Okinawa. He and other Code Talkers tirelessly communicated troop movements, tactics, orders and other information via phone and radio.

Sandoval received numerous recognitions and awards as a veteran, including a Navy Unit Commendation Ribbon, a Combat Action Ribbon, a China Service Medal, a World War II Victory Medal, a Navy Occupation Service Medal with Asia Clasp and an Asiatic-Pacific Campaign Medal with a silver star, according to the Navajo Nation. But for years he remained silent about his service, not even informing his wife he was a Code Talker until a month or so after their marriage.

The Navajo Code was declassified in 1968, enabling Sandoval to eventually share his story in a book and documentary film. Public recognition of the Code Talkers increased in 1982, when President Ronald Reagan proclaimed August 14 Navajo Code Talkers Day, and the 2002 film “Windtalkers” solidified their fame. (“All I can say is it’s a movie — a Nicholas Cage movie,” Sandoval joked to his Milwaukie High School audience.)

Sandoval was on Okinawa in 1945 when “word came over radio in the Navajo Code, and I received it, that the Japanese had surrendered,” he recalled to students in 2005. He and his fellow Code Talkers celebrated, but their return to America was still far off: just a few days later they boarded a ship to China for occupation duty. A few months later, in December 1945, Sandoval recalled, “the commanding officer called us before we left China. And he said ‘Son, here’s a piece of paper. Here’s my pen. Right at the top of the line.’”

Sandoval looked the form and realized it was to sign up for another four years of service.

Memorial details for Sandoval are pending, and a granddaughter has launched a crowdfunding campaign to cover expenses.

Are Mini Robots Coming to a Hospital Near You?

The trailer for “Guy Ritchie’s The Covenant” just dropped — and it’s a doozy. The film, set in Afghanistan, centers...

The Day Miss America Almost Got Shot Down Over Vietnam

I’ve always believed that “with time, all truth is revealed.” Fifty years have provided a time to remember, reflect, and...

How This Digital Map is Connecting Civil War Faces to Places

The Library of Congress in November debuted an online exhibit mapping hundreds of portrait photographs from the Liljenquist Collection to...

Are Mini Robots Coming to a Hospital Near You?