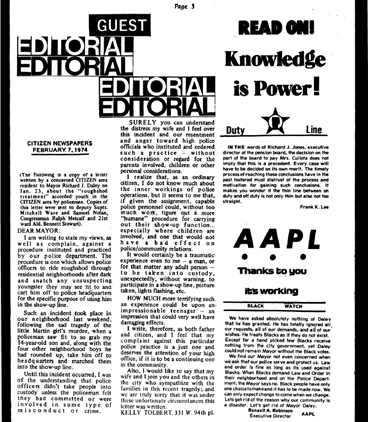 In this blog post, CHM intern Kirsten Lopez shares what she learned while preparing to interview a retired Afro-American Patrolmen’s League member as part of an ongoing CHM oral history project.

During my summer 2021 internship, I had the opportunity to work on CHM’s ongoing Afro-American Patrolmen’s League (AAPL) Oral History Project, which is focused on collecting the stories of former AAPL members to create a more diverse collection. In preparation for the culminating interview with a retired AAPL member, I spent the first few weeks of the internship learning about the organization and acquainting myself with the digitally available material from the AAPL archive housed at CHM. While I became familiar with the names of AAPL founders and Chicago political players, I did not come across the name Wylola Evans, the civilian member I would be interviewing. I wondered how she was connected and what type of work she did.

As it turns out, Evans was not only the League’s first full-time employee, but she also supervised the entire AAPL office and was the primary point of contact for “League membership, activities, views, etc.” according to the League newsletter, The Grapevine. “Etcetera,” I came to learn, meant anything from attending National Black Police Association conferences to printing and distributing event posters around the city; from securing sponsors to answering citizens’ calls to the AAPL’s Police Brutality and Legal Referral Service. The “long, crazy hours” and “little to no pay” were worth it, Evans told me, “Because we were interacting with the community.”

I went back into the archive and started looking for Wylola Evans.

Among the newsletters and editorials, I found two occasions in which members were directed to “ask for Miss Evans” when they called the office. Evans, it became clear, was at the very center of AAPL activity, but she was largely absent from the literature and archival materials that are currently publicly available.

It seems timely to think about all the work that goes into achieving historical change and how it is mostly done without fanfare and out of the public eye. Indeed, during my time at CHM I witnessed firsthand how much time and consideration is taken by Museum staff to maintain its collections and ensure a continuous offering of events and exhibitions for the public.

The work of cataloging, moving boxes, fighting mold, and updating metadata that allows institutions like CHM to preserve and shed light on the everyday stories that make history relevant is unglamorous but, like the work of AAPL’s civilian staffers, essential. And, in keeping with AAPL’s stated commitment to being “available to many individuals and community organizations, giving them advice on their legal rights, and in participating in solving community problems,” it feels only right to show appreciation for the invisible work that made such a transformative relationship between police and citizens possible. As the very first AAPL newsletter urges members, “REMEMBER: THE LEAGUE IS YOU.” The practice of oral history aims to capture the lived experiences that might otherwise remain overshadowed. And so, let us take this lesson from Wylola Evans that history is in the hidden work of everyday people.

If you were a former member of the African American Patrolmen’s League and would be interested in sharing your story, please contact us at 312-642-4600 or through our Collection Donation Form.

For his 108th birthday, an original member of the Montford Point Marines ― the group of the first Black troops...

“You are about to embark on a crusade, a crusade as important to the world as was the great crusade...

This Maori WWII Ace Lived and Died as a Hero

Since the last of a series of wars between British colonists and native Maoris ended in 1872, white residents of...