Will the Warriors keep Draymond Green in the fold? 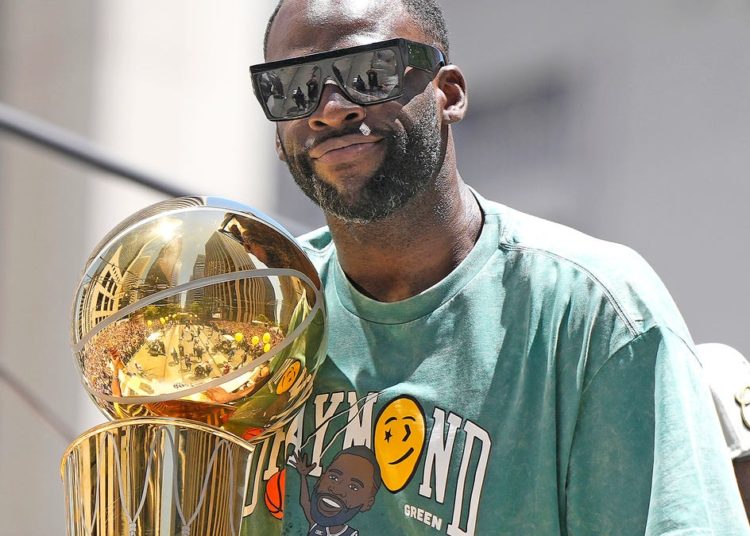 
In the aftermath of Golden State’s 2022 NBA title, the expectation was that the Warriors and billionaire owner Joe Lacob’s Midas Touch would continue forever. While reporting on Golden State’s $171 million luxury tax bill, ESPN’s Brian Windhorst referred to its championship as a checkbook win. That phrase took on a life of its own, forcing Lacob to respond as a guest on Andre Iguodala’s Point Forward podcast, where he earned a fine from the NBA for criticizing the luxury tax.

“The hardest thing of all is navigating this luxury tax, unfortunately,” he told Iguodala. “I went back to New York this week for labor meetings. I’m on the committee. And you know, obviously, the league wants everyone to have a chance, and right now, there’s a certain element out there that believes we ‘checkbook win. …’ We won because we have the most salaries on our team.”

Six weeks later, the glow from Steph, Dray, and Klay’s fourth title has faded, the adrenaline has worn off and bleak financial reality is beginning to set in. Lacob is going to have to dive into his savings to keep this Big 3 together.

Lacob’s beef with the luxury tax is understandable. As the 24th richest NBA governor, Lacob is an NBA pauper. His net worth of $1.2 billion is a fraction of Steve Balmer’s, Dan Gilbert’s, and Robert Pera’s. Next season, Golden State’s total bill including the luxury tax is supposed to be north of the $362 million it paid this past season. Getting taxed by Uncle Sam and Uncle Adam Silver has Lacob feeling lighter in the pockets.

In the next year, Jordan Poole and Andrew Wiggins will be seeking salary bumps through extensions. One central figure in the Warriors dynasty who was supposedly going to be taken care of for the foreseeable future was Draymond Green. However, according to sources close to The Athletic’s Marcus Thompson, Green will ask for as much as a four-year, $138 million contract when he’s eligible for an extension on Aug. 3.

Green is set to make $25.8 million this coming season. He is due $27.5 million for 2023-24, but it’s a player-option. He can decline it and become a free agent next summer. So the maximum extension Green could sign starting next week involves him opting out of the final year of his current deal and signing a four-year extension worth $138.4 million.

G/O Media may get a commission

All indications, though, are that the Warriors have no plans to offer Green a maximum extension, and there isn’t any current traction on any type of extension. The typical pattern of this Golden State front office is to extend with one year remaining. Even Steph Curry waited until one year remained before signing his max extension last offseason. Green has two years remaining on the maximum extension he signed in 2019. While he could opt out a year earlier, the Warriors’ current preference is to talk extension with Green next summer.

There’s a reason Lacob made those luxury tax comments on Iggy’s pod instead of Draymond’s. If Lacob were to re-sign Green, Poole, and take care of Wiggins, Golden State would be facing a total bill of approximately $564 million dollars. For added context, the Memphis Grizzlies’ 2022 payroll balanced out to a relatively meager $121 million, nearly $30 million below the $150.2 million luxury tax threshold. Lacob, who told The Athletic’s Tim Kawakami last month, “Those numbers are not even remotely possible,” will eventually be forced to make a Sophie’s Choice and Green may be the guy on the chopping block.

Pierce’s reputation never recovered from that stinging rebuke. Now it’s Green cajoling the Warriors to give him his final Rod Tidwell payday, but do the Warriors love him like that? After everything he’s done for this franchise, they should. In 2019, Green accepted a team-friendly $100 million extension instead of waiting until 2020, when he could have tested free agency to circumvent a rule that caps the first-year salary of veteran extensions at 120 percent of what they earned the previous season. Even then, his $100 million contract was called an impending albatross. Not only do the Warriors owe him for their bounty, but he’s proven his detractors wrong before.

It’s been a mutually beneficial relationship, but there’s still work to be done, and turning 2023 into a “Last Dance” sequel is short-sighted even if you take the luxury tax into account. Last season, the Warrior’s revenue eclipsed $700 million. Between basketball revenue and the revenue generated from Chase Center’s non-basketball event schedule, Lacob and his ownership group are still making money hand-over first. Green was paramount to Golden State becoming the second-most valuable franchise in the NBA.

From a basketball perspective, Green has been polarizing for years. He’s a fire-breathing do-it-all dragon who often self-immolates and his heaves at the basket play tin music bouncing off the rim on a nightly basis. Yet, he is one of the top-3 single-digit scorers in NBA history.

He’s third on the marquee behind Steph and Klay, but he’s the emotional and defensive engine that has kept Golden State humming along. He’s a plus-minus god whose vision, intangibles, ball movement, switchable defense, and bone-jarring screens for a team that relies on him to create space for Curry to operate. His contributions don’t always show up in the counting stats. If Green was asking for a up to $60 million per year deal like the one Curry signed, you could argue he’s lost his marbles, but $35 million per is reasonable in this bustling NBA economy.

In the latter years of a four-year extension, he might be Udonis Haslem with a podcast, but the window is now. In addition, other NBA players notice when teams take care of “their guys.” The Warriors took advantage of the system in 2016 when they were able to fit Kevin Durant under the cap as it spiked. Lacob later bragged that Golden State “kind of blew a hole in the system.” What goes around comes around. It appears the system is swinging back.

Ultimate Guide to the Best Liquid Lipsticks at Every Price & Finish

Golden Buzzer: Chapel Hart Wows The Judges With Original, "You Can Have Him Jolene" | AGT 2022

Kyrie Irving: still not a LakerPhoto: Getty ImagesDuring a season in which league-wide parity has been the overarching theme, the...

https://usatodayhss.com/lists/friday-night-notes-the-year-of-the-gamecock-top-2024-recruit-on-the-move-again-and-more Friday Night Notes: The Year of the Gamecock, Top 2024 recruit on the move again and more South Carolina...

Screenshot: Twitter (left)/eBay (right)Somebody is willing to pay six figures for a Mason jar filled with sand where Tom Brady...

From the high school hardwood across the country, USA TODAY High School Sports is back with the NFHS Network’s Weekly Top...

Golden Buzzer: Chapel Hart Wows The Judges With Original, "You Can Have Him Jolene" | AGT 2022