China’s Tank in the Vietnam War 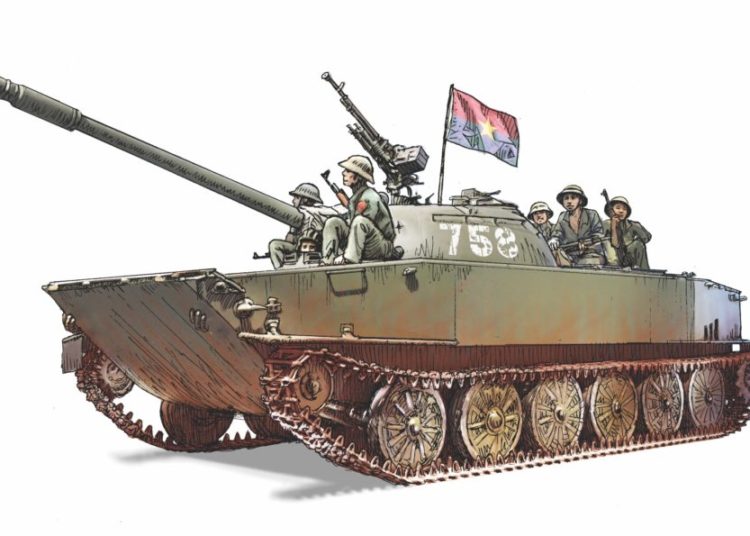 One of the more exotic North Vietnamese Army tanks to crash through the gates of Saigon’s Presidential Palace on April 30, 1975, was similar to the Soviet-built PT-76 amphibious light tank, but with a rounder turret and a larger gun. This latecomer to the Vietnam War did not arrive from the Soviet Union, however. It came from the People’s Republic of China.

China had acquired some PT-76s in the 1950s, but its continuing tensions with the exiled Republic of China on Taiwan led to the need for an amphibious light tank with better performance and armament for landing operations. The first design, designated the Type 60, was unsatisfactory, particularly because its engine overheated. A second prototype, while better, still experienced problems during its first tests in 1959.

Those problems were addressed in the course of further development, and after testing in river, lake and sea environments, the tank was approved for production as the Type 63 in April 1963. It soon entered service with China’s army.

That tank did not serve long, however, before it was superseded on the production line by the Type 63-1, replacing the original 240-horsepower, six-cylinder diesel engine with a 402-horsepower, 12-cylinder 12150-L-2 diesel. The Type 63-1 proved its worth in China in 1966, when some of them crossed the Qiongzhou Strait between the mainland and Hainan Island.

Armed with an 85 mm cannon, the Type 63 offered more firepower and greater mobility than the PT-76, although its armor provided little protection against more than light machine gun fire or shrapnel. It entered North Vietnamese service late in the war but in time for the final offensive of 1975, when the NVA was finally starting to make effective use of the lessons in armored tactics its crews had learned at heavy cost during the stymied spring offensive of  1972. After the fall of Saigon and unification of North and South Vietnam, the new Socialist Republic of Vietnam would have another occasion to use its Type 63s in combat—in 1979, against Chinese invaders, whose equipment also included Type 63 tanks.

In 1997 the Chinese introduced an upgraded model with a 105 mm gun, the Type 63A, which remains in their arsenal today.

Thanks, all, for my tenure. Critic that I am, though, here are some final thoughts — GetReligion

Blonds have more fun. Yeah, yeah, yeah, we know. But according to this U.S. Navy training film, they also prefer...

“How to succeed with brunettes or blondes … they are all important missions wouldn’t you agree?” states the unctuous 1940s-sounding...

September 24, 1969, marked the beginning of one of the most infamous trials in U.S. history for eight (later seven)...

‘The Woman King’ and the Warrior Women of Dahomey: Has Hollywood Finally Gotten History Right?

Quick question: What are the two most populous continents on Earth? The first answer’s easy: Asia, with over 4.7 billion...