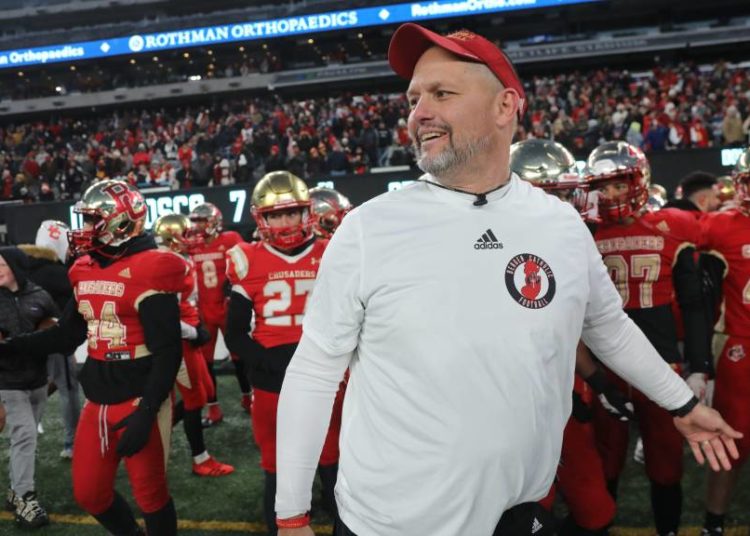 Bergen Catholic’s football program has created a tradition of success for multiple seasons, with the New Jersey high school power consistently mentioned among the best in the nation.

And to echo USA TODAY High School Sports Awards‘ Randy Buffington, behind every great team is a solid head coach.

That’s certainly true of the Crusaders’ Vito Campanile, who has been nominated for USA Today High School Sports Awards Coach of the Year.

The head coach leans on what he’s learned—wisdom from his grandmother and uncle, plus other coaches and players—to motivate and mold the next generations of young men.

And, after listening to a matter of seconds in the video below, it’s easy to see why Coach Campanile is worthy of such an esteemed nomination.

The nationwide event will kick off with 24 in-person local shows that lead up to the national show featuring athletes from all 50 states.

The national broadcast begins at 8 p.m. ET via the USA TODAY High School Sports Awards website, YouTube and the USA TODAY channel available on most smart televisions and devices.

ALL 6 GOLDEN BUZZERS On America's Got Talent 2022!

Kyrie Irving: still not a LakerPhoto: Getty ImagesDuring a season in which league-wide parity has been the overarching theme, the...

https://usatodayhss.com/lists/friday-night-notes-the-year-of-the-gamecock-top-2024-recruit-on-the-move-again-and-more Friday Night Notes: The Year of the Gamecock, Top 2024 recruit on the move again and more South Carolina...

Screenshot: Twitter (left)/eBay (right)Somebody is willing to pay six figures for a Mason jar filled with sand where Tom Brady...

From the high school hardwood across the country, USA TODAY High School Sports is back with the NFHS Network’s Weekly Top...

ALL 6 GOLDEN BUZZERS On America's Got Talent 2022!