Germany Counts on Chilled Gas to Keep Warm Over Winter 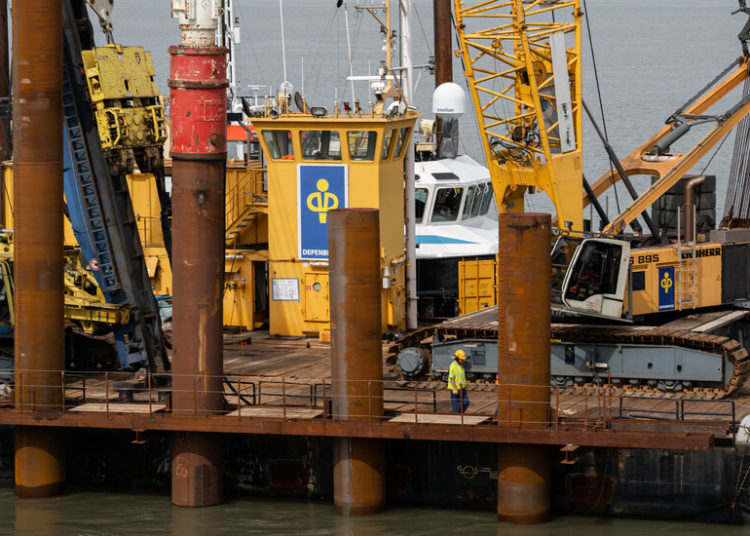 
WILHELMSHAVEN, Germany — When a major energy company wanted to bring liquefied natural gas to Germany through the North Sea port of Wilhelmshaven three years ago, the proposal hit a brick wall. The company couldn’t find enough customers, the government offered only tepid support and residents denounced the scheme as a threat to a local apple orchard.

Now, steel pipes are being rammed into the sea floor to prepare for the arrival of a nearly thousand-foot-long L.N.G. processing vessel, the Höegh Esperanza. Nearby, construction crews in bulldozers are digging along the perimeter of a forest to clear the way for a new 20-mile pipeline to connect to Germany’s gas grid.

The hope is for gas to start arriving here before the end of winter, Uniper said, as the demand for heating homes soars.

Germany is in a race to bring in more natural gas from new sources as Russia slowly chokes the amount of fuel it provides to Europe’s largest economy, a punishment for opposing the invasion of Ukraine. On Wednesday, Russia cut flows through the Nord Stream 1 pipeline connecting the two countries to one-fifth of capacity, the latest curtailment since it started restricting deliveries in June. The stakes are escalating as officials in Berlin prepare for potential gas rationing and an economic downturn if deliveries are ultimately cut off.

L.N.G. is the most readily available fuel to make up for the shortfall. Long considered an overpriced alternative to reliable flows via pipeline from Siberia, L.N.G. almost overnight has become the answer to Germany’s overreliance on a single supplier, and a hope of staying warm over the winter.

When Berlin called for companies to help increase supplies of the energy, said Holger Kreetz, Uniper’s chief operating officer for asset management, all his company had to do was pull the plans out of the drawer.

“This is an important project that will help us get through this crisis,” Mr. Kreetz said. “It also highlights what is possible when the political will is there.”

Energy ministers from the European Union agreed on Tuesday to call on all 27 member nations to voluntarily cut their natural gas consumption by 15 percent until spring. Germany is targeting even deeper cuts, and at the same time has set aside 2.5 billion euros ($2.55 billion) to rent four L.N.G. processing vessels, including the one destined for Wilhelmshaven.

The urgency to push the projects forward is unusual in a country known for deliberation and exhaustive government reviews. But Germany’s dependence on imported energy left Berlin few choices if it hoped to keep its economy humming. The move is complicated by the fact that Berlin is rushing ahead with Uniper, a company that it just agreed to bail out because of its struggles amid the energy crisis caused by the Ukraine war.

In an interview in a fish restaurant overlooking the harbor in Wilhelmshaven, Mr. Kreetz said that he had never done business in this accelerated way, but that given the energy crisis it was “right” to compress the planning and financial analysis that went with large energy projects. “Otherwise, you would lose a lot of time that we need for constructing,” he said.

Wilhelmshaven, where bird-watching and tourism exist alongside a container port and naval base, is front and center in Germany’s plan to replace Russian natural gas.

Unlike the rest of Europe, which boasts roughly two dozen terminals to receive liquefied natural gas, Germany resisted building L.N.G. facilities for decades, arguing that chilled natural gas arriving by ship was too expensive. After all, the thinking went, abundant gas was available via pipeline from Russia, and, if necessary, Germany could always draw on terminals in neighboring countries like the Netherlands and France, which before the invasion were underused.

Our Coverage of the Russia-Ukraine War

Since Russia began curtailing gas deliveries to Europe, cutting off or reducing flows to 12 members of the European Union — Germany has decided it needs its own fleet of floating terminals. These installations are essentially ships with apparatus to take the chilled liquefied gas from seagoing tankers, warm it back into a vapor and move it onshore.

Recent approval granted to the other northwestern ports, in Brunsbüttel and Stade, have created a competition for which provider can have the first terminal up and running before winter is over. Wilhelmshaven, with its deep harbor and direct access to the sea, is aiming to win, and may wind up with more than one.

Local officials and businesses in Wilhelmshaven are hopeful that success in importing L.N.G. could smooth the way for the port to become a hub for bringing in hydrogen, which may have a bright future as a fuel because the European Union is promoting it as a greener substitute for natural gas to meet climate change goals.

The pressures to deliver energy are “not only our biggest challenge but our biggest opportunity” said Mathias Lüdicke, branch manager for Niedersachsen Ports, which is readying the pier.

For now, though, the focus is on liquefied natural gas. Its great advantage is that it can be transported across oceans on ships — chilled to minus 260 degrees Fahrenheit, natural gas reduces into a liquid that takes up only one six-hundredth of its volume as a gas — from major producers like the United States and Qatar.

When all four L.N.G. receiving stations are up and running, they could go a long way toward compensating for the lost Russian supplies.

“Nobody would have thought that things could have gone that quickly,” said Massimo Di Odoardo, vice president for global gas at Wood Mackenzie, a consulting firm.

But securing all those tankers of gas may prove more difficult than hooking up new terminals, Mr. Di Odoardo said. In the past, most of the chilled fuel went to Asia, where China, Japan and South Korea are key customers. But in the first half of this year, shipments of L.N.G. to Europe rose about 50 percent from a year earlier, Mr. Di Odoardo said.

Supplies surged from the United States, which in the first half of the year became the world’s largest exporter of liquefied natural gas, according to the U.S. Energy Information Administration, with nearly two thirds of its exports through May going to the European Union and Britain.

Maintaining those levels of imports, or increasing them, won’t be easy. New supplies are limited, and European buyers will most likely need to outbid Asian customers. The German government, which has portrayed the shift to L.N.G. as a temporary solution before moving to fuels like hydrogen, will also need to decide whether to commit to the 20-year contracts that would lock up new L.N.G. supplies. Such long-term commitments were a stumbling block in the aborted effort to build a terminal in 2019.

“When the producers negotiate with us, they want” long-term contracts, Mr. Kreetz said. “Obviously, this is something the government needs to sort out.”

The German government has taken over as the critical broker and financier of L.N.G. because of the potentially disastrous consequences of gas shortages for the economy. Uniper, Germany’s largest gas importer from Russia, is no longer in a position to play such a role. The Düsseldorf-based company has sustained deep financial losses because of the Russian cutbacks. Last week, the government stepped in to take a 30 percent stake in the company.

Environmentalists, who have argued against the use of natural gas because it is a fossil fuel that introduces greenhouse gases into the atmosphere, have been forced to accept the reality that pushing back against the government’s plans would not be popular in the current situation.

“We are trying to make the best out of the worst,” said Stefanie Eilers, the head of the local chapter of NABU, a prominent conservation group in Germany. The group has been fighting to preserve Wilhelmshaven’s lush wetlands, which are home to oystercatchers and swallows and attract migrating cranes, geese and ducks.

But their efforts are more muted than they were three years ago, said Olaf Lies, a local native who is the energy minister for the State of Lower Saxony, which includes the port,. Back then, he recalled, there were protests over fears that planned pipelines connected to the L.N.G. facilities would destroy an apple orchard that had been around for years.

“That was more or less how the project was viewed,” said Mr. Lies, adding that he and other officials now feel the need to move quickly to quit Russian gas. “Today we realize that reckless view prevented us from making decisions that left us in this position of dependency.”