Preacher, wife robbed of $1M in jewelry during sermon 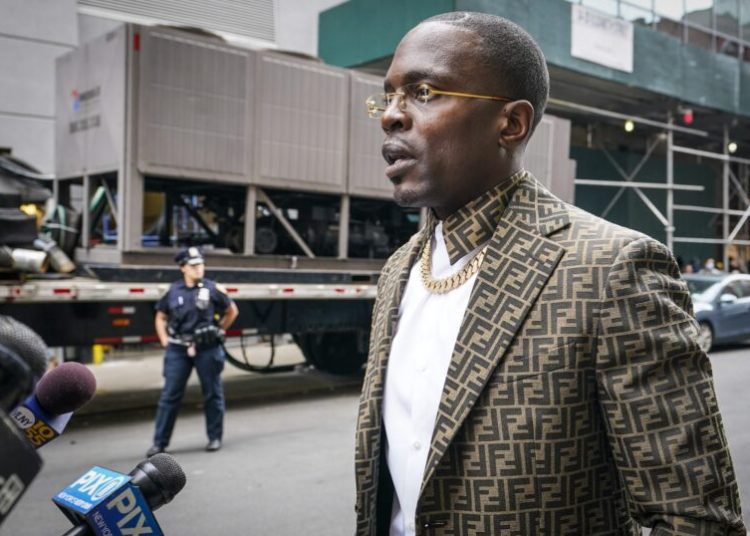 
NEW YORK (AP) — A preacher known for his close friendship with New York City’s mayor was robbed of more than $1 million worth of jewelry Sunday by armed bandits who crashed his Brooklyn church service, just as he was sermonizing about keeping faith in the face of grave adversity, police said.

Bishop Lamor Miller-Whitehead, who embraces his flashy lifestyle and can often be seen driving around the Big Apple in his Rolls Royce, was delivering a sermon at his Leaders of Tomorrow International Ministries when police say three robbers walked in. They showed guns and demanded property from Miller-Whitehead and his wife, Asia K. DosReis-Whitehead, police said.

The service was also being livestreamed online.

In the video, which appears to have been removed from the church’s social media channels, Miller-Whitehead is heard asking his flock, “How many of you have lost your faith because you saw somebody else die?” moments before the robbers entered the church.

He’s then seen dropping to his hands and knees and repeatedly saying, “alright, alright,” before a man holding a gun and wearing a black sweatshirt enters the frame. The man, who was also wearing a black face mask, is then seen approaching Miller-Whitehead, who was hiding behind a gold-colored lectern, and stuffing the bishop’s jewelry into his pockets.

Another man, dressed in similar garb, is then seen heading toward Miller-Whitehead, lingering near him for a few minutes and then running off. Miller-Whitehead said in a video posted to Instagram that the robbers ripped his collar off to grab his chain and held a gun to his infant daughter’s face while stealing his wife’s jewelry.

Police said the robbers fled in a white Mercedes that was last seen on Avenue D near the church, in Brooklyn’s Canarsie neighborhood. Neither Miller-Whitehead, 44, nor DosReis-Whitehead, 38, were physically injured, police said. They daughter was also unharmed.

In a video posted to Instagram, Miller-Whitehead said he felt a “demonic force” enter the church and wasn’t sure if the gunmen “wanted to shoot the church up or if they were just coming for a robbery.” He said he’s thankful no one was hurt.

“When I see them come into the sanctuary with their guns, I told everybody to get out, everybody just get out,” said Whitehead, who on Monday offered a $50,000 reward for information leading to the arrest of the robbers.

A message seeking comment was left with Leaders of Tomorrow International Ministries.

Miller-Whitehead, 44, formed Leaders of Tomorrow International Ministries in 2013, after serving a five-year prison sentenced for identity theft and grand larceny. Miller-Whitehead claims he was illegally convicted.

“No one in this city should be the victim of armed robbery, let alone our faith leaders and congregants worshiping in a House of God,” Adams said in a statement. “The NYPD is investigating this crime and will work tirelessly to bring the criminals involved to justice.”

In a video posted Monday to YouTube, Miller-Whitehead thanked the mayor for his support. He said next Sunday’s church services would go on as planned.

Adams, a former police captain, grew close to Miller-Whitehead while serving as Brooklyn’s borough president — the position he held for eight years until becoming mayor in January. Miller-Whitehead made an unsuccessful bid last year to succeed Adams in that post.

In May, Miller-Whitehead made headlines for showing up to a Manhattan police precinct in a Rolls Royce SUV as he attempted to negotiate the surrender of a man accused of gunning down a stranger on a New York City subway train.

Miller-Whitehead told reporters at the time that he had “multiple conversations” with Adams regarding Andrew Abdullah’s surrender, though the suspect was ultimately picked up by police outside the offices of the public defender organization that was representing him.

In an Instagram post Sunday, Miller-Whitehead defended his bling-loving lifestyle, saying he’s “going to live his life the way God has it set up for him.”

How should worn-out Bibles or Qurans be disposed of? — GetReligion

Exploring the MOST Profitable Shopping Mall in the USA : Queens Center

How should worn-out Bibles or Qurans be disposed of? — GetReligion

As the question indicated, federal law states that an American flag “in such condition that it is no longer a...

Back in the 1980s, I wrote a profile of a remarkable Episcopal priest in Colorado who was approaching his 100th...