The Teamsters Union in Chicago 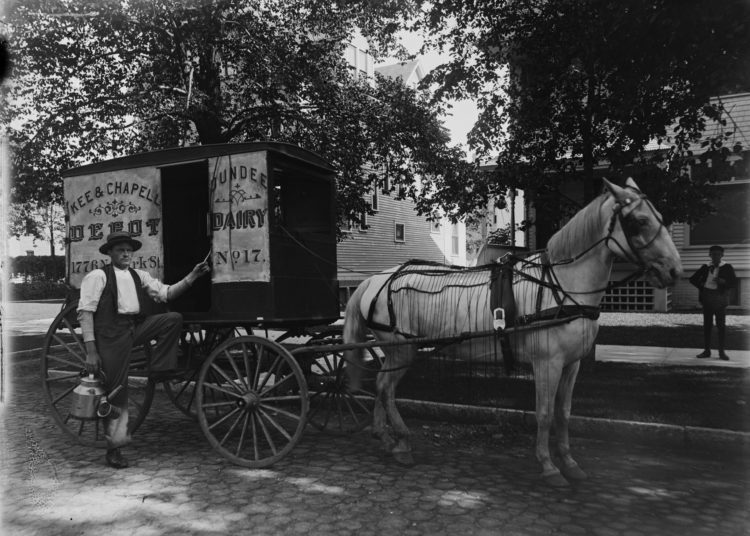 In recognition of International Workers’ Day, we’re spotlighting the Teamsters Union and its history in Chicago.

Historically, the term “teamsters” referred to commercial road transportation workers. Before 1945, most teamsters worked locally, driving “teams” of horses throughout Chicago. By the late twentieth century, national road networks enabled an interstate trucking industry, which employed many long-haul drivers and expanded the meaning of the term.

Local processors had to rely on various forms of transportation to bring milk from farms and to distribute it to its consumers. Kee & Chapell Depot/Dundee Dairy horse-pulled cart, Chicago, c. 1895, The business was located at 1776 N. Clark Street. CHM, ICHi-072655

In the late 1860s, Chicago hack owners and drivers organized to stabilize hack fares. Around the turn of the century, teamsters began to organize labor unions. With help from the American Federation of Labor, the Team Drivers International Union (TDIU) was formed in 1898 with its headquarters based in Detroit. A few years later, a Chicago group broke from the TDIU and formed the Teamsters National Union. The Chicago-based union did not allow large employers to become members and advocated more aggressively than the TDIU for higher wages and shorter hours. Ultimately, the two unions merged in 1903 to form the International Brotherhood of Teamsters (IBT), also known as the Teamsters Union, and they elected Cornelius P. Shea as their first president.

By 1905 the IBT had established a joint council in Chicago, with forty-five affiliates and 30,825 members. These locals were militant, assisting other unions in their struggles for recognition. In 1905, teamsters aided striking employees of Montgomery Ward & Co. When other businesses and the Employers’ Association of Chicago rallied to Ward’s defense, the dispute spread quickly. Riots broke out almost daily, and the 103-day conflict led to twenty-one deaths. After the employers’ victory, some locals deserted the IBT, forming a rival Chicago Teamsters’ Union (CTU).

Testimony after the strike revealed that some union leaders had taken bribes to end the strike, which weakened public support for unions. In the 1920s and ’30s, union leadership continued to face accusations of corruption, coercion, and gangsterism from businessmen, while radical labor organizers like William Z. Foster charged them with selfishly thwarting mass unionism. Such accusations continued into the following decades—and weren’t all without merit. In 1929, the Teamsters and other unions in Chicago approached gangster Roger Touhy for protection from Al Capone and his Chicago Outfit, which were seeking to control the area’s unions.

The Teamsters survived these allegations and remained influential in Chicago labor circles. After reincorporating the CTU locals in 1937, the IBT expanded by organizing transportation, clerical, retail, and manufacturing workers. William A. Lee of the bakery drivers local served as Chicago Federation of Labor president from 1946 to 1984.

However, the AFL-CIO (American Federation of Labor and Congress of Industrial Organizations) expelled the IBT in 1957 in large part due to corruption charges against Dave Beck, Teamsters president from 1952 to 1957, and Jimmy Hoffa, who served as president from 1957 to 1971. Although Hoffa helped unify the Teamsters in 1964 under the National Master Freight Agreement—a milestone national agreement for teamsters’ rates, which covered more than 450,000 truck drivers—and helped expand the union’s growth, he faced major criminal investigations. He was convicted of jury tampering, attempted bribery, conspiracy, and mail and wire fraud in two separate trials in 1964, one in Nashville and one in Chicago.

When Hoffa entered prison in 1967, Frank Fitzsimmons was named acting president. He continued on as president after Hoffa resigned in 1971. Under Fitzsimmons, Teamsters authority was decentralized back into regional and local leaders. Today, the Teamsters remain one of the largest labor unions in the world with 1.2 million members, with members ranging from brewers and bakery workers to airline pilots and sanitation workers.

A new memorial to honor the members of the Laotian Hmong community who fought and died for the U.S. in...

These War Films Were Remade — Should They Have Been?

Beau Geste The 1924 novel by P.C. Wren, about brothers who run off to join the French Foreign Legion in...

United States Provides $476 Million in Urgent Food, Humanitarian and Development Assistance to the People of Somalia Amid Worst Drought on Record and Looming Famine | Press Release